Should the terms font and typeface be used interchangeably?


There is no doubt that they are used this way today. But is that something we should fight or embrace? And what do these words mean anyway? Let’s have a look …

What do these terms mean anyway? The most simple explanation is: a typeface is what you see, a font is what you use. Both refer to a “set of letters (or symbols to put it more broadly) with a specific style”, but the term typeface puts the focus on the artistic work, whereas font points to the actual tool to arrrange and print or display text using a design with a specific style. Considering the most common techniques, this tool can be …

In contrast to what one might expect, most dictionaries aren’t of much help either and they demonstrate that the problems around the distinction between the two terms isn’t a new phenomenon caused by computer users with a lack of knowledge about letterpress printing. Most English dictionaries I checked use something like a “set of letters in a particular design” as the key element for the definition—but for both terms! The additional characteristics usually vary. Some limit the terms to printing, others have updated this to include today’s digital use as well. Some mention a specific size for fonts, some make that optional or omit it altogether.

But most experts in our field probably agree that at its core, it’s about the visual design on the one hand (☞ typeface), and the useable manifestation or instance of this design (☞ font) on the other hand. And this broad definition works for all typesetting techniques.

It can’t be denied: The term font is used all the time in our field today. We go to sites like myfonts.com, fonts.com, fontshop.com and download digital font files to put them in a font folder and later use them in our application by opening the font menu. And other designers who see our work might later ask for a “font identification”.

Still, there are people who reject this use of the word font, because it is not a perfect match with how they might have learned to define it decades ago when they started out with letterpress printing. Yes, fonts for letterpress printing happened to be size-specific. It’s just a physical requirement of this technique. And in a letterpress cabinet, each size of a typeface would be referred to as individual font. But as shown before, this is not necessarily a key element nor a requirement to define the term font for all eternity. Just as with the material by the way. Font (or “fount”) probably comes from the “melting” or “casting” of the metal alloy in order to make the moveable type. Yet, the same term was used when wood type became common, even though nothing is actually melted or casted in this case. Despite the conflict with the “original” meaning of the term font, it made sense to adopt it for wood type as well, because the purpose was the same. And the same thing happened with the shift to scalable fonts with phototypesetting and later digital typesetting. A phototypesetting disc was neither casted from metal nor was it restricted to a specific type size. Yet, just as a letterpress font it was used to typeset a specific type design and that’s why the term font was used as well. Sure, we could also use completely different terms for different typesetting techniques, but using a shared definition for letterpress fonts, phototypesetting fonts and digital fonts is just a normal effective use of language.

The interchangeable use of font and typeface

Now that we have clarified what the terms mean and why they exist the way they do, let’s move on to the actual question of this article. A typical complaint about today’s use of font and typeface is that the interchangeable use removes the distinction between the terms and so this is something that must be avoided. But in my opinion, that is a flawed logic, which often seems to be based on the assumption that only one term could be correct in any situation. The other extreme—which is also quite common today—is to say we should just give up and accept that these terms are essentially synonyms today. I disagree with both positions. They only propose two possible options: the use of these terms must be exclusive or identical. But that is a false dilemma. There are more options and I want to argue, that the interchangeable use of font and typeface is mostly the result of the fact, that both terms usually apply at the same time and so it just doesn’t matter much which one we pick.

Let me explain that with an analogy. Take the words “song” and “recording” for example. They aren’t synonyms of course. I can whistle a melody and someone standing next to me might recognize the “song”. The person is standing next to me, listening to me. No recording was involved. But I could also give a talk and someone makes an audio recording of it. There is now a “recording”, but since it was just talking, the word song wouldn’t make sense. Both words have different meanings and in these two examples only one was valid in each case. But if we talk about music albums for example, both terms apply at the same time. There are songs—the musical composition (and optionally lyrics)—and there is a specific recording of that song on a certain album. If we talk about a specific album, it doesn’t matter if we refer to the songs or the recordings on that album. We could mean exactly the same thing. The recordings are the manifestations of the songs and both are bound together. This relationship can be shown in a very simple Venn diagram: 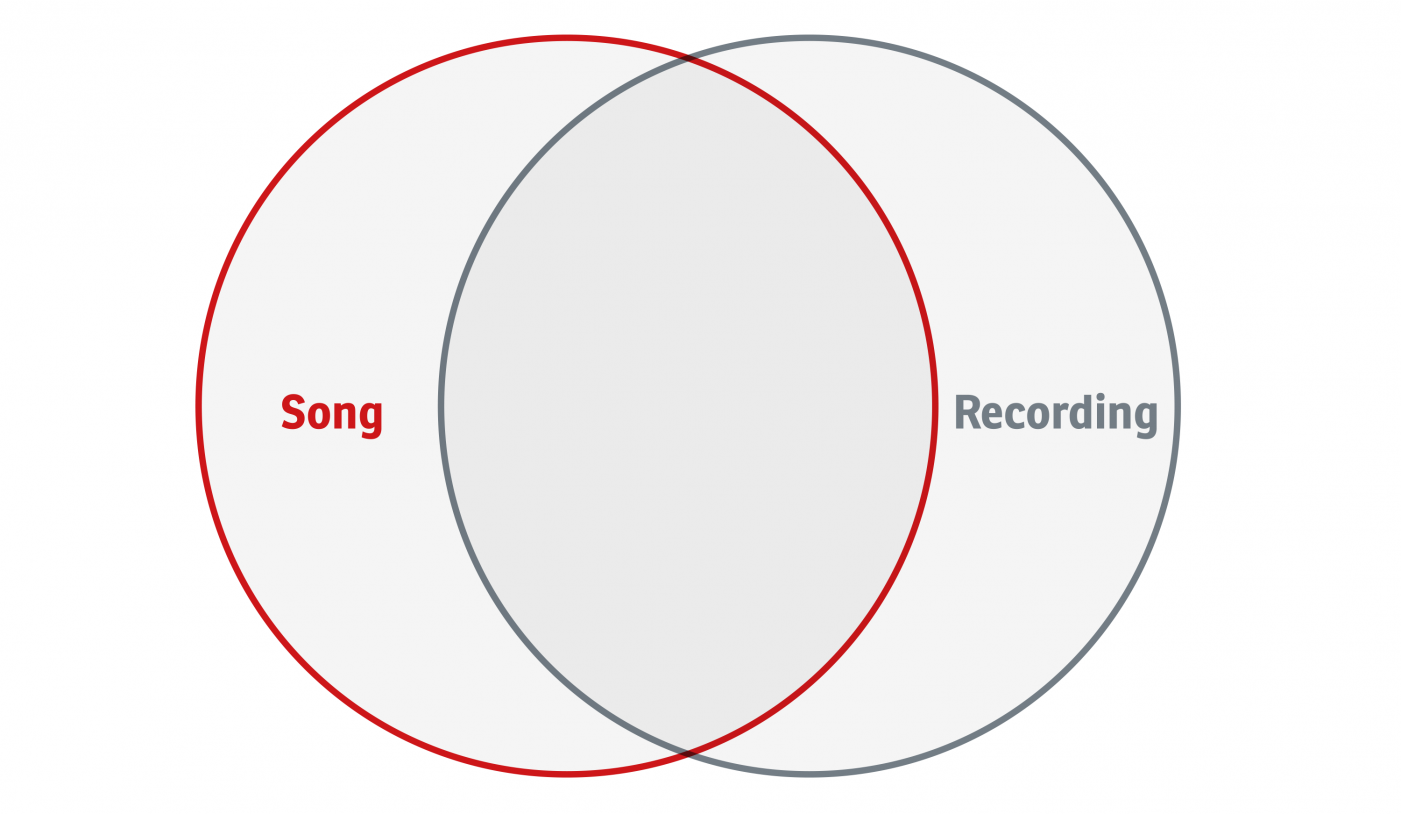 There can be exclusive and overlapping uses of the terms. It doesn’t have to be “exclusive” or “identical”.  Usually we just refer to a song or a recording by the same name written on the album cover and there are hardly any confusions. The linguistic symbols are pointing to the same thing. But as shown in the diagram, there are exclusive uses as well. A song might appear on different albums of the same artist or even different artists. In this case song and recording clearly point to different things and we need to make sure to use the correct words.

And I would argue, that typeface and font share the same relationship as song and recording. When a new typeface or family with different styles is released, there will be fonts available to actually use the design or the different designs within the family. It goes without saying. And that’s the overlapping use that explains the interchangeable use. Helvetica Bold Italic is both a typeface and an available font. But that does not mean that typeface and font are synonyms. The exclusive uses remain as well. A type designer sketching letters in a notebook isn’t drawing a font. The designer is working on the visual artwork—the typeface! If the designer ships that typeface in various font formats I might have a folder on my computer with one typeface, but two or more fonts. In such cases an interchangeable use of font and typeface would make little sense and might cause unnecessary confusion.

Words don’t have intrinsic meanings—words have usages. Therefore it makes little sense to cling to a very narrow metal type definition of the word font, just because that happens to be the first or literal meaning of that word. It’s almost ridiculous to deny the reality of the usage of the word that became common with phototypesetting and digital type. Nothing is lost anyway. It is always possible to apply a broader or more narrow meaning depending on what the specific context requires, as we do it with many other words as well. If necessary, we can use a broader meaning for the word font which covers all typesetting techniques. And at the same time we can create categories and sub-categories to be highly specific about certain types of fonts. The specifics of a letterpress font can still be described by referring to it as “letterpress font” or “wood type font” to be even more specific.

And in my opinion the interchangeable use of font and typeface is fine, as long as we stay in that overlapping area of the Venn diagram. There can be a fine line between words being used interchangeably in certain contexts and words being synonyms. In this case, it is a difference that matters and one that we should be aware of.